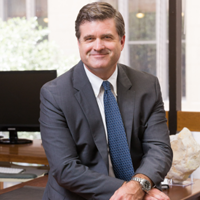 Tylden Shaeffer is a San Antonio criminal defense lawyer who has concentrated his law practice on criminal law for the past 30 years. Mr. Shaeffer grew up in San Antonio and obtained his bachelor’s degree in international relations from Brown University. Then, earned his law degree from the University of Texas at Austin School of Law in 1990. He has been licensed to practice law in the state of Texas since November of 1990 by the Texas Supreme Court. Additionally, he has been board certified in criminal law by the Texas Board of Legal Specialization since 2004.

Mr. Shaeffer worked as a federal law clerk for a Dallas Immigration Court Judge during law school. He began working in the Bexar County District Attorney’s Office in January of 1991 soon after passing the Texas Bar Exam.

He left the D.A.’s office as a first chair felony prosecutor supervising a team for a District Court. During his tenure as a prosecutor, Mr. Shaeffer tried over 150 jury trials at all levels of offenses, including several death penalty cases. He gained invaluable experience in every substantive area of the office, including DWI, misdemeanor offenses, felony offenses, white collar crime, family violence cases and juvenile law.

In January of 2000, Mr. Shaeffer left the D.A.’s office to open his own law practice. He has handled a wide variety of misdemeanor, felony, federal and juvenile cases as a Defense Attorney. Moreover, he has represented individuals seeking to expunge or seal their criminal or juvenile records. He has attended advanced continuing legal education courses. Mr. Shaeffer is licensed to practice law in state courts in Texas as well as in the federal courts of the Western District of Texas and belongs to the State Bar of Texas. He is AV® rated by Martindale-Hubbell® and has been recognized by his peers locally as one of San Antonio’s best criminal defense attorneys according to Scene Magazine. He has also been asked by several courts to represent the State as a special prosecutor and has lectured at legal seminars in the area.

Mr. Shaeffer has focused his practice on giving his clients a dedicated and vigorous defense—seeking to put them in the optimal position to resolve their legal matters effectively and to help them get their lives back to normal after dealing with the criminal justice system.